The St. Louis Mosaic Project is one of the few, if only, immigrant welcoming programs housed within an economic development organization – the St. Louis Economic Development Partnership/World Trade Center St. Louis.

It’s an arrangement that makes sense. As Executive Director Betsy Cohen notes, Mosaic is a marketing program, not a service provider. It plays an important role in the attraction of foreign-owned firms and in the retention of both domestic and foreign-owned companies.

The Mosaic Project launched in 2012 in response to a report that highlighted the economic opportunity that foreign-born individuals bring to the St. Louis region, and the relatively slow growth of their numbers compared to peer communities. Unlike many other immigrant-welcoming programs, Mosaic has very specific goals: to “transform St. Louis into the fastest growing metropolitan area for immigration by 2025 and to add 25,000 foreign born to the region 2016-2025, to promote regional prosperity through immigration and innovation.”

A 32-member steering committee led the program’s development and continues to provide guidance. (Mosaic has two full-time and one part-time staff members.) It represents (and receives funding from) organizations across the spectrum, including businesses, civic and economic development agencies, academic and faith organizations and immigrant services groups.

“In the beginning, [the project] was about learning where the resources where, what the demographics were, and what the needs were, to have vibrant services that would be an attraction for others to come here,” said Cohen.

Ultimately, Mosaic’s goal is to create a receptive, welcoming community that would allow foreign-born people to thrive in the region. To do that, Mosaic focused on ways to connect people to the right resources, whether those were other people, services or organizations.

“With the low unemployment rate, our companies really need to recruit talent, so they see it as an imperative,” said Cohen.

Mosaic started an Immigrant Entrepreneur Program in recognition of the fact that foreign-born individuals in St. Louis are 60 percent more likely to start a business than the native-born. The program aims to connect immigrant entrepreneurs to the resources to start a successful business and has multiple components, including:

Another initiative, just started in early 2020, is STL Fashion Meets, through which Mosaic aims to help foreign-born talent connect with emerging and established designers, small and growing businesses, entrepreneurs and influencers in the region’s fashion industry. Mosaic continually pushes stories of immigrant businesses and profiles of their owners, particularly in industries such as fashion and food, out to the media.

And of course, the 9,000-plus international students studying at various colleges and universities in the region are great candidates to become future residents. Mosaic’s Global Talent Hiring Program, like other Mosaic programs, has multiple initiatives in place to help retain some of those students, including:

“The region usually has about 9,000 international students through the region’s many universities. While these will probably drop over the short term in terms of international students residing in St. Louis region, the many that are still in the region have a high percent of degrees in IT, Scientific, STEM, Data Analytics and other fields that will be in high demand to aid in economic recovery. In the first seven years, the low employment meant a great need for workers of all skill levels. Even with rising unemployment numbers in 2020 and forward, a high percentage of the foreign born have skills in STEM, IT, and scientific/medical fields that will be in increased demand with not enough native born talent to fill those jobs. And the service fields of health care, food service and other direct service industries are likely to depend on a high number of foreign-born workers as unemployment starts high and comes down with economic recovery.”

In addition to programs for foreign-born individuals already in the region, Mosaic is part of the recruitment team that goes on trade missions and talks to international companies looking to expand or locate in St. Louis. As well, “it’s the aftercare of the employees and their families, connecting them to the community, that’s powerful,” said Cohen. 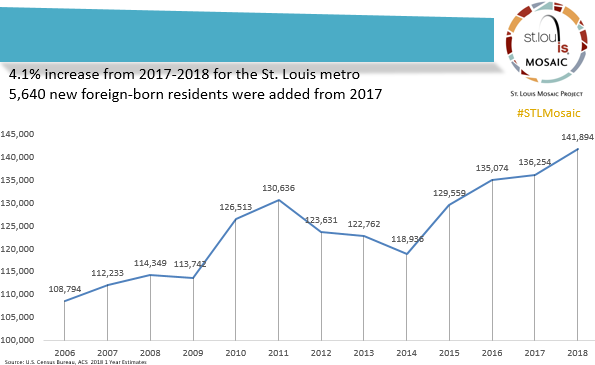 “When we started seven years ago, companies were more interested in how the program served the community as a whole,” said Cohen. “Now they are saying, ‘I want to be a preferred employer among the foreign-born talent pool.’” They benefit from the exposure they get through Mosaic, offering to host events and tours at their workplaces.

Cohen attributes Mosaic’s success to its 200-plus community partners and to continually adding to its offerings: “We attract foreign-born individuals because we keep innovating with new programs to meet new needs, geared toward economic development through population and workforce growth.”