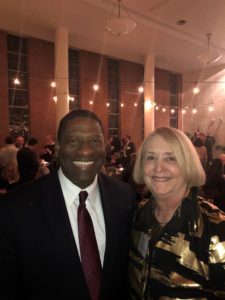 The International Institute of St. Louis (IISL) celebrated their 100th anniversary of serving the region’s immigrants, their families, and the wider community through education, economic development, and various other immigration services at their gala on Thursday evening, Nov. 14th. The St. Louis Mosaic Project, led by Executive Director Betsy Cohen, has worked extensively with IISL to help foreign-born St. Louis residents find fulfilling lives in the region.

Anna Crosslin, President and CEO of IISL, gave awards to individuals and foundations that have helped build up and support St. Louis immigrants. On behalf of The St. Louis Mosaic Project, Cohen was awarded the prestigious inaugural Anna Crosslin Award 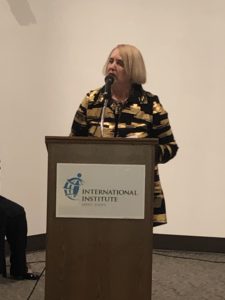 “It is very meaningful for the St. Louis Mosaic Project to be the inaugural winner of the Anna Crosslin award from the International Institute of St. Louis upon celebrating the Institute’s 100th anniversary,” Cohen said. “From its inception in 2012 at the World Trade Center-STL of the St. Louis Economic Development Partnership, the St. Louis Mosaic Project has been a team effort that has been a catalyst for regional population and economic growth through our growing foreign-born community. The recent population growth results showing our region as third-fastest growing major metro for foreign-born population in 2018 reflects on how our region has been welcoming and supportive of our foreign-born community of all skill levels and all ethnicities. This is additive to the ongoing support needed for our native-born community to grow, so it is win-win for all of us in the region.”

Among other winners were:

A silent auction with performances from flamenco/jazz and Latin guitarist Dan Hoerle as well as Better Family Life’s Kuumba Youth Performance Ensemble were among the highlights of the centennial celebration.