39 North (39N) has made great strides in Ag Coast of America development, ag tech partnerships, the STL Greenway, and the debut of their new website.

St. Louis’ location and the amounts of livestock and crops produced in the region position St. Louis as a global leader in food production and distribution, and the three collaborating economic development agencies are leveraging them to meet the food scarcity challenge ahead.

“Our world class freight network is just one of the critical ingredients enabling the St. Louis region to take on the world’s food shortage,” said Mary Lamie, Bi-State Development’s Vice President – Multi Modal Enterprises. “Through creativity and collaboration, we have maximized our strategic location for transportation and ag production and have built the talent pool, capital and research capabilities required to address food scarcity for the next 50 years This level of cooperation and commitment from a region that includes two states and over 15 counties is unprecedented, and it is attracting other forward thinkers and businesses to our region to tackle this important global challenge.”

A delegation visit on February 4th, 2020 from Agri-Tech East, a UK agtech membership organization with links to Cambridge University, will be held in St. Louis. The purpose of their visit will be to tour St. Louis’ ag tech capabilities. The delegation will be funded by the British government.

Janet Wilding, Vice President of 39 North and Major Projects at St. Louis Economic Development Partnership, is excited to work with Agri-Tech East and sharing 39 North’s innovative district with them.

“Welcoming Agritech East to St. Louis is a continuation of 39N’s visit last February to the UK with the World Trade Center-STL,” Wilding said. “We shared ideas, best practices and our mutual interest in global food security through the promotion of increased agricultural productivity. We have much to learn from each other.” 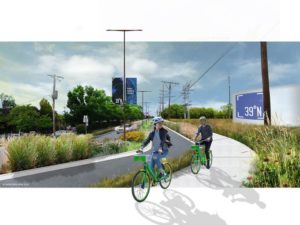 The open space and greenway alignment, which comprises the 39N Greenway, is a cohesive vision for the landscapes in 39N that redefine the way people travel, gather and interact within the district.  As part of the public engagement for both the master plan and greenway, residents, current employees and visitors to the district almost unanimously requested improved connectivity for people, bikes and cars.  The high priority projects that have been identified in the 39N master plan all address the connectivity challenge.

Connectivity between the office, retail and commercial areas of the 39N district is almost non-existent, but the 39N Greenway plan will change that.

The 39N Greenways Draft Plan is now available for public review. The Creve Coeur City Council had a joint work session with the Planning and Zoning Commission and the Parks and Historic 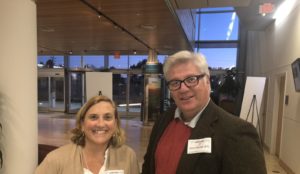 Preservation Committee on Monday, November 25, 2019, to review the plan and provide comments, questions with the Consultants.

The Planning and Zoning Commission are now considering the plan for adoption as a component of the comprehensive plan and in support of the continued development of the 39N District in the same manner as the 39N Master Plan and the Old Olive Great Street Plan.

39N now has a new website. The comprehensive site lays out all 39 North’s initiatives and where they are in the process of these projects.